Eliahou Eric Bokobza’s visual research into aspects of identity began in 2000 in his first solo exhibition, Plaisir Oriental. The links between movement, music and the presence of a performing body, appear and reappear in his work over the years, and have lately Bokobza to expand his practice into animation, as in the video Tikva [Hope] on view here. Oum Tosca, the earliest work in this exhibition, portrait of a singer in a dramatic gesture, melds three figures: the fictional singer Tosca, heroine of Puccini’s opera of that name, Oum Kulthum, the icon of Eastern culture who earned a universal reputation, and the artist’s mother – an opera singer by profession – who sang both arias of Tosca and songs by Oum Kulthum, treating them with equal importance. This register shows the broadness of the cultures embedded in the exhibition. Reflecting on the relationship between abstract and concrete, East and West, is evident in Big Flora (2009), the figure of a belly dancer reclining like an odalisque in Orientalist tradition, bringing to mind the Grand Odalisque by Ingres (1814). She is surrounded by patterns, some of them abstract, a place that is no-place. The movement, the dance signifying her essential nature, has disappeared. Fan (2019), made the same year as the video animation Tikva, is an object that has lost its movement and functionality. Fan exploits to the fullest the stereotype of the Orient as comprising all that is non-European, from North Africa to China, as a place frozen in time and taken out of context. The eyes which become the flowers on the fan, a fragmentation of the body, relate to the Blackamoor (2006), dark-skinned men holding candelabra, a critique of the racist tradition of using African figures in European art and design. Hybridization of the figure with the claws of a beast, similar to the hybrid eyes-flowers, refers to the paternalistic approach to equating people of the East with “natural creatures,” with the bestial. Bokobza brandishes questions of what is acceptable and what is ridiculous, but especially the “why.” 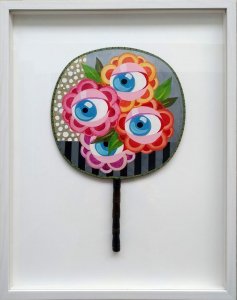 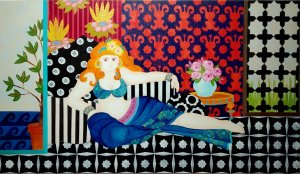 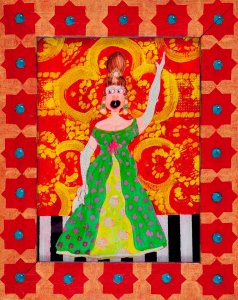 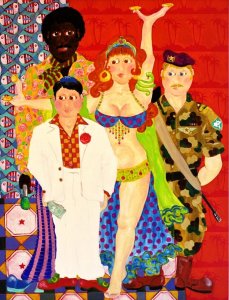